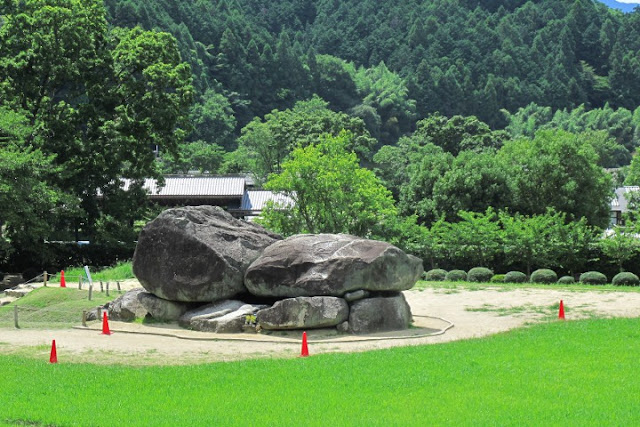 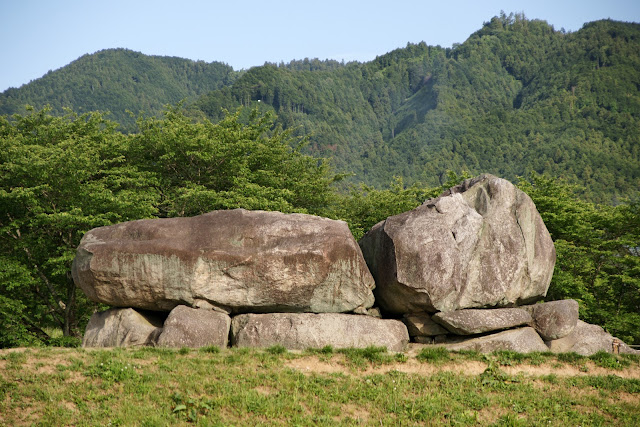 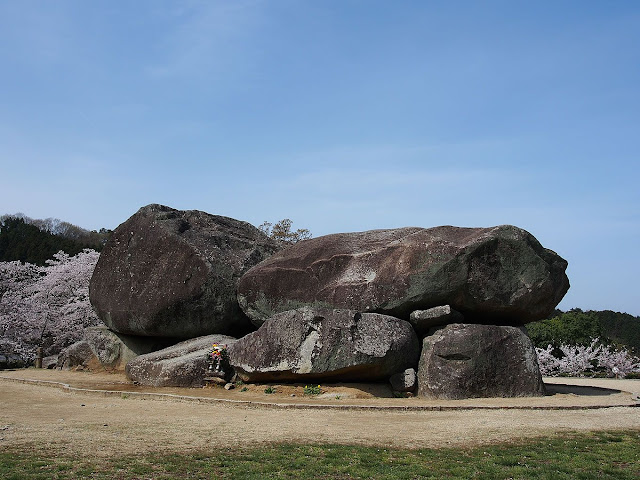 Built around the beginning of 7th century, scholars believed Ishibutai-Kofun is the burial site of one of the powerful leaders of Soga clan, Soga no Umako. The tomb is 7.8 meters in length, 3.4 meters in width and 4.8 meters in height and is composed of around 30 pieces of granite weighing approximately 2,300 tons.

The term Ishibutai is a combination of two Japanese words, “ishi” and “butai” which mean stone and stage respectively. Folk story says that once upon a time, a fox transformed into a woman and danced above the stones. Another story tells there was this traveling entertainer who used the large tomb stone as a stage in performing. 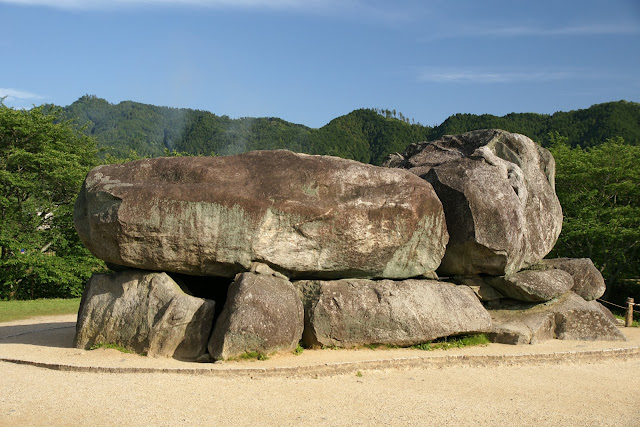 Admission fee is JPY 250 and the place is open daily from 8:30AM to 5PM. From Kashihara Jingu-mae station or Asuka station, you can take the Nara Kotsu Bus to Ishibutai-mae bus stop to visit the tomb. 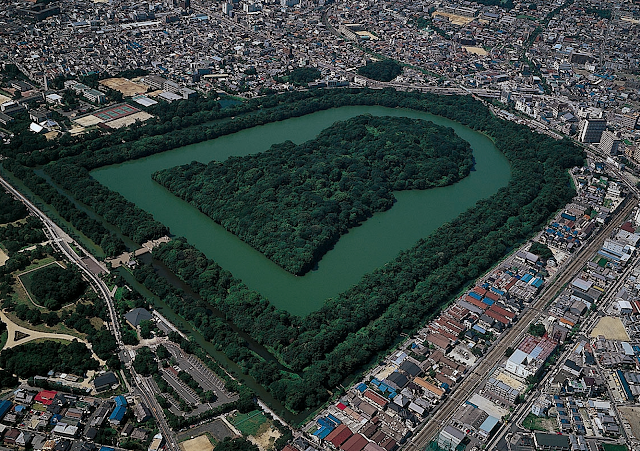 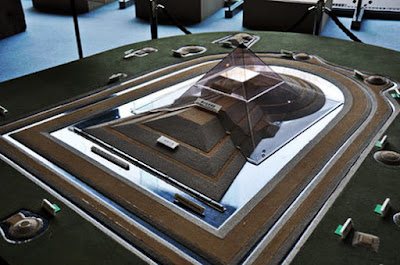 This is the largest keyhole-shaped tomb in Japan, measuring approximately 486 meters in length, 249 meters in diameter, 35 meters in height for the back circular mound, 305 meters in width and 33 meters in height for the front mound. Engishiki (the classical compendium of rules) named this tomb Mozu-no-mimihara-no-naka-no-misagi, and currently, the Imperial Household Agency has determined it to be the tomb of Emperor Nintoku, the 16th emperor, and is in charge of managing it. The mound is three-tiered with tsukuridashi (a space for religious ceremonies) on either side of the narrowest part of the tomb, and surrounded by three moats. The current outermost moat was re-dug in the Meiji Era. In the 5th year of the Meiji Era (1872), a rectangular stone coffin placed in a pit-style burial chamber was excavated from the front rectangular mound, and along with it, swords, fine armor, glass pots, dishes, etc. were discovered.

Also, the Sasenmonjyutaikyo (a mirror) and Tahoukantoutachi (a sword with animal engravings), among others, which are said to have been excavated from this tomb are currently in the collection of the Boston Museum of Arts in the United States. In addition, there have been more than ten smaller tombs called Baicho discovered around the tomb. Daisenryo is without a doubt the largest keyhole-shaped tomb in Japan, but there are doubts to other information regarding this tomb; recent excavation projects have revealed shards of Sue ware pots from the tsukuridashi, which would increase the possibility of the tomb being built from mid to late 5th century, raising archaeological controversy about whether it actually is the tomb of Emperor Nintoku. There is an approximately 2.8 kilometer walkway encircling the tomb, which takes an hour to walk around. 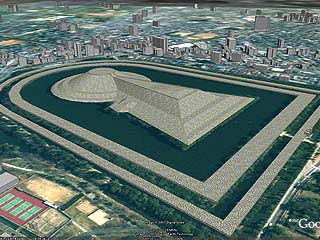 What is Mozu-Furuichi Kofungun?
Construction age and composition of the tumulus cluster.
Mozu-Furuichi Kofungun is a group formed of monumental kofun spread across Sakai, Habikino and Fujiidera Cities in southern Osaka. Though divided into two areas ("Mozu" in Sakai and "Furuichi" in Habikino and Fujiidera), they have sufficient integrity and continuity to be treated as a single entity. More than 200 kofun were built within these tumulus cluster between the late 4th century and the early 6th century, and, 89 of these still survive today.
The largest of these tumuli is Nintoku-tenno-ryo Kofun (mound length 486m, the longest in Japan). Next comes Ojin-tenno-ryo Kofun (425m, 2nd longest in Japan), then Richu-tenno-ryo Kofun (365m, 3rd longest), Nisanzai Kofun (290m, joint 8th longest), Nakatsuhimeno-mikoto-ryo Kofun (290m, joint 8th longest) and Chuai-tenno-ryo Kofun (242m), in that order. 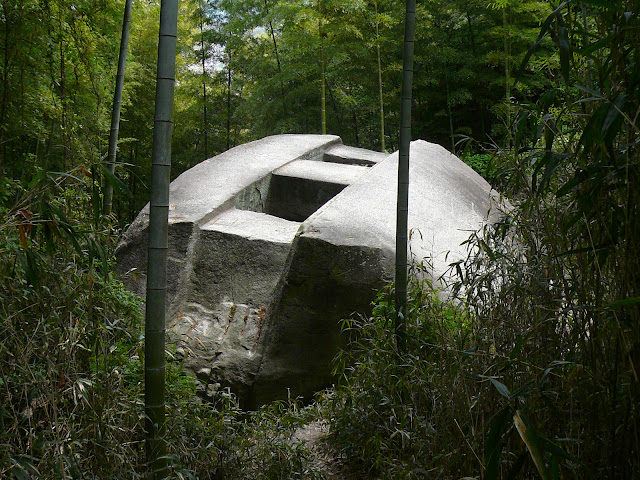 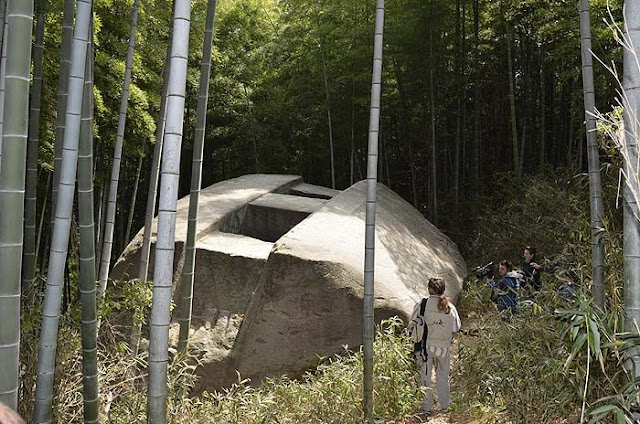 The village of Asuka is located in the Takaichi District of the Nara Prefecture in Japan. Asuka is an ancient land with historical interest. It has its origins in the Tumulus Period (250-552 AD), also called Kofun jidai, which means Old Mound period.  This era of Japanese history is characterised by a particular type of burial mound that was popular at the time; specifically key shaped earthen mounds surrounded by moats.  One of the most unique features of Asuka is the multiple carved granite stones in peculiar shapes in various parts of the region. The largest and most unusual of the carved stones is the Masuda-no-iwafune (the 'rock ship of Masuda').

The stone carving, which stands near the top of a hill in Asuka, is 11 metres in length, 8 metres in width and 4.7 metres in height, and weighs approximately 800 tonnes.  The top of has been completely flattened and there are two one-meter square holes carved into it and a ridge line that is parallel to both holes. At the base of the stone are lattice-shaped indentations which are believed to be related to the process that was used by the builders to flatten the sides of the rock. So what is the nature of this rock and what is its purpose? Who made it, when and why? Unfortunately, there are no definite answers to those questions, but numerous suggestions have been put forward to account for this unique and unusual structure.

In the region in which Masuda no iwafune is found, there are many Buddhist temples and shrines that may suggest the carving was made by Buddhists, perhaps for some kind of religious or ceremonial purpose.  However, Masuda no iwafune does not resemble the style or construction of any other Buddhist monument.

Another suggestion comes from the name of the rock itself, which translates to ‘the rock ship of Masuda’. It has been suggested that the stone was carved in commemoration of the building of Masuda Lake, which was once located nearby (now drained and part of Kashiwara City).

Another popular theory is that it was used as an astronomical observation point. Evidence for this perspective comes from the ridge line across the top of the rock which runs parallel to the mountain ridge in Asuka and lines up with the sunset on a certain day of the year called "spring doyou entry", which occurs 13 days after the sectional solar term ‘Pure Brightness’. This day was important in the lunar calendar and for early Japanese agriculture as it signalled the beginning of the agricultural season.  However, this perspective has been largely dismissed by scholars who do not recognise it as an ancient astronomical observing station.

Some historians believe that the rock is just the remains of a tomb that was designed for members of the royal family. However, this does not explain the unusual features, such as the square holes on top, nor have any bodies been found.  To account for this, some have suggested it was intended as the entrance of a tomb but was unfinished.

Interestingly, Masuda no iwafune bears a similarity to another stone block in Japan – the Ishi-no-Hoden megalith, which is situated in Takasago city.  The Ishi-no-Hoden megalith measures 6.45m x 5.7 m x 5.45 m, and has similar ridges on the sides but without any visible holes – although some suggest that they are beneath the trees on the top of the rock. Today, Ishi-no-Hoden is a shrine dedicated to the Shinto god Oshiko Jinja, but no one knows who originally built it and why.

Very little is known about the Masuda no iwafune stone carving and definitive evidence is still lacking with regards to who built it and why. The fact that there are so many other stone slabs and structures in the area suggests that the region was inhabited prior to the Tumulus period, but again, there is no proof to support this perspective.  In the end, the true origin and purpose of these enigmatic features of ancient Japan may be lost to the pages of history.
By John Black 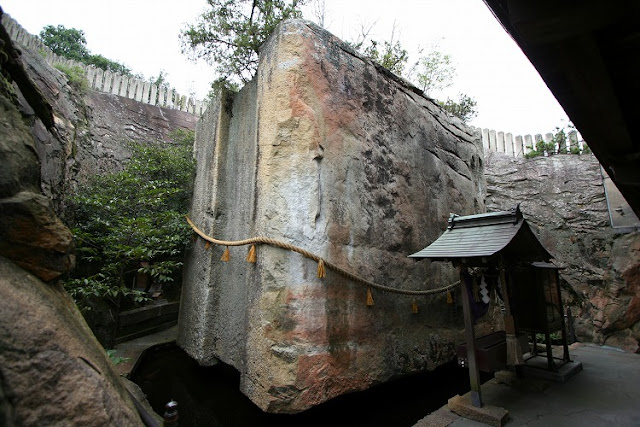 Ishi-no-Hōden ; Alternative Name: 石の宝殿，Ishi-no-Houden
Sculptured Stone in Honshū
A mysterious dug-out cube monument in a quarry. Known as one of 3 greatest enigmas in Japan. Now worshiped as the god of the Ōshiko jinja shinto shrine. Although the structure of the top is concealed by pine trees, they suspect that there may be 2 holes like Masada-no-Iwafune and Kengoshizuka-kofun. The name of the nearest station is named after this site "Houden". 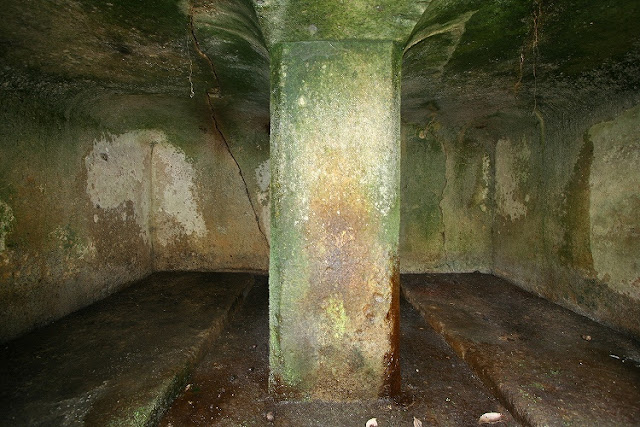 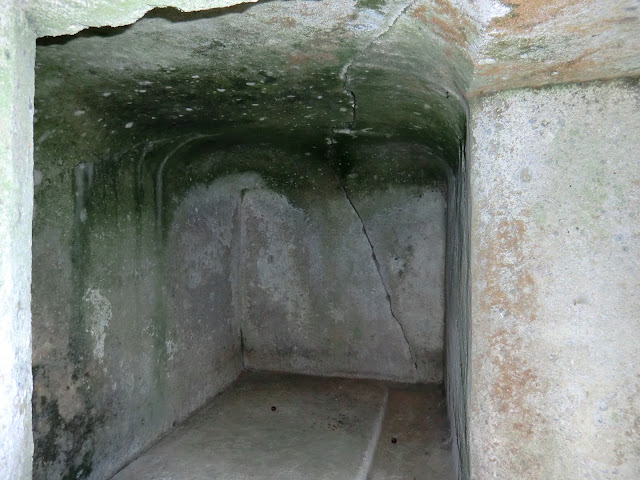 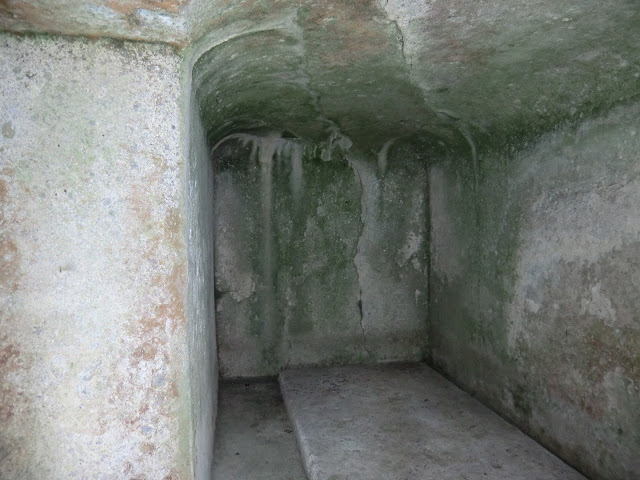 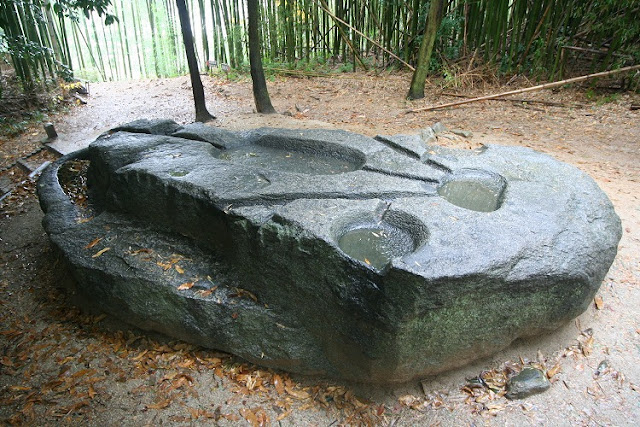 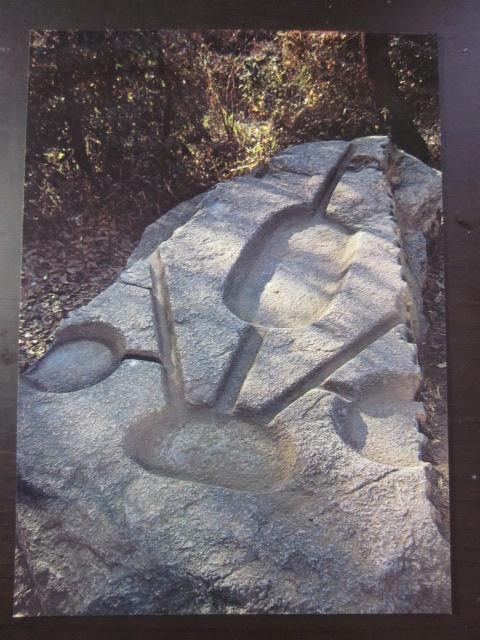 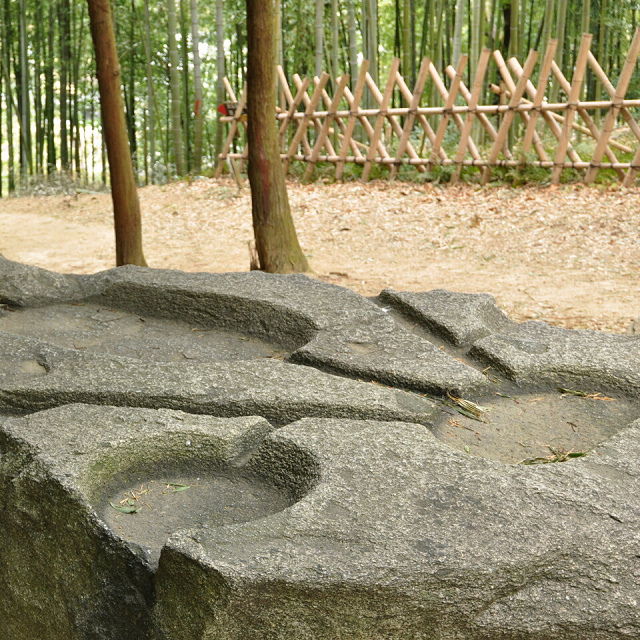 Sakahuneishi
====================
It may be that those seeking answers are looking at these sites and monuments with a certain degree of 21st century and perhaps Western chauvinism, and that their lack of familiarity with ancient Japanese cultural practices means that they will remain blind to potentially obvious purposes and meanings behind them.  Though much of the our understanding today comes from the work of researchers and archaeologists native to Japan, so that explanation may not carry much weight.

But archaeology in this part of the world is different from other places.  Quickly changing language systems, and an early habit of religiously/politically motivated revisionist history, added to the reluctance of locals to trust outsiders, definitely hinders efforts to bring meaning to these ancient artefacts from a time long gone. 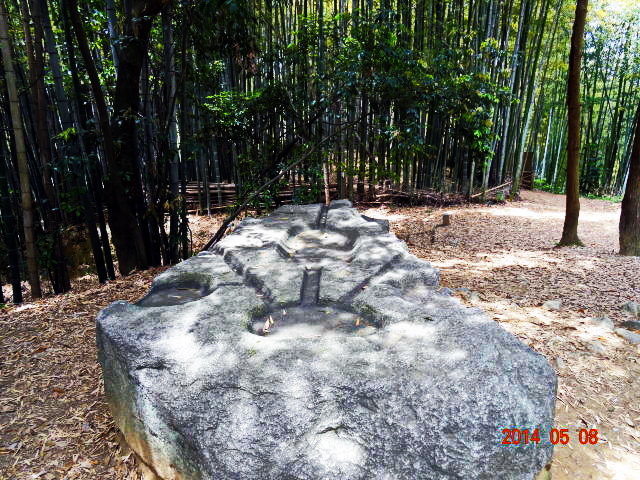 In the end, the true origin and history of these enigmatic features of old-world Japan may be lost to the passage of time.  We can learn much from the study of ancient traditions, customs and languages, but not everything survives the long march of the ages.