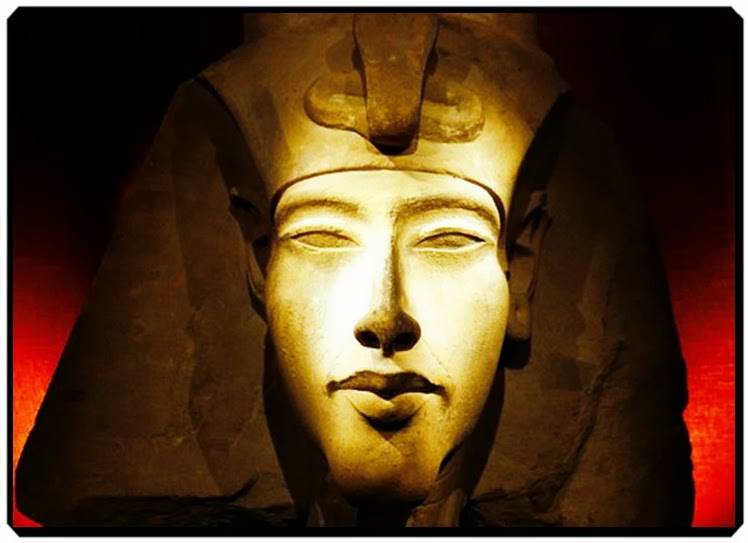 Aten disk Credits: wikipedia.org http://en.wikipedia.org/wiki/File:Aten_disk.jpg
Akhenaten was known before the fifth year of his reign as Amenhotep IV.  He was a Pharaoh of the Eighteenth dynasty of Egypt who ruled for 17 years, and was the father of  Tutankhamun. He is especially noted for abandoning traditional Egyptian polytheism and introducing worship centered on the Aten.
The Aten, the sun-disk, is first referred to as a deity in The Story of Sinuhe from the 12th dynasty, in which the deceased king is described as rising as god to the heavens and uniting with the sun-disk, the divine body merging with its maker. By analogy, the term “silver Aten” was sometimes used to refer to the moon.
The solar Aten was extensively worshiped as a god in the reign of Amenhotep III, when it was depicted as a falcon-headed man much like Ra. Akhenaten claimed, “There is only one god, my father. I can approach him by day, by night.” This was a very, very strange statement for the time. Akhenaten could have been the first monotheist in all of history, a precursor to Abraham, Isaac, Jacob and Muhammad as prophets who worshiped one god.
In the reign of Amenhotep III’s successor, Amenhotep IV or Akhenaten, the Aten became the central god of Egyptian state religion, Amenhotep IV changed his name to Akhenaten to reflect his close link with the new supreme deity.

Statue of Pharaoh Akhenaten, also known as Amenhotep IV by Richard Nowitz National Geographic
Akhenaten was one of the most controversial Pharaohs to rule Egypt. According to Egyptian Mythology he descended from the gods who arrived on Earth at the time of Tep Zepi and until today, people still believe that this Pharaoh did in fact come from the Stars.
In 1352 BC, Akhenaten ascended to the throne as the tenth pharaoh of the 18th dynasty. Almost immediately, he instituted a series of radical religious changes, including a ban on references to multiple gods. He abandoned traditional Egyptian polytheism and introduced the worship of the Aten.
An early inscription likens him to the sun as compared to the stars. Akhenaten, upon becoming Pharaoh ordered all the, the iconography of previous gods to be removed. He only allowed one emblem, which was a sun emblem, literally a sun disk with curious arms or rays pointing down.
According to writings by Akhenaten and poems that were written about him later on, he was visited by beings that descended from the sky, who told Akhenaten what he needed to do, and perhaps this is why he removed all other symbols of other gods from Egypt and implemented most of the changes he went on to do.
Akhenaten claimed to be a direct descendant of Aten and like any other pharaoh Akhenaten regarded himself to be divine, he was a God, but not only did he believe himself to be a god, the whole nation saw him as a god and worshiped him like one. During his time as Pharaoh Akhenaten made numerous changes but he also ordered the construction of a new capital city which he called Amarna and he dedicated it to the sun.
Akhenaten spent the next ten years there and in that time he instituted changes in art and culture and on of the most notable changes were how he would be publicly depicted, and this was important because in Egyptian iconography, Pharaohs are depicted as these triangular shaped beings, strong shoulders and these very skinny waists, so basically they were depicted as being strong, like heroes, this would reflect power and it was very important but Akhenaten would go on and shows himself perhaps as he really is, a strange look, unlike other Pharaohs.

The list of peculiarities is lengthy: an elongated skull, long neck, sunken eyes, thick thighs, long fingers, backward-turned knee joints, a prominent belly that suggests pregnancy and female-like breasts. The first thing that is strange is his elongated skull, and in all of the statues and depictions of him, we see this elongated skull. In general his body was sort of like a feminine and masculine mixture.
The change in royal iconography of Akhenaten depicted him with a misshapen head, with a potbelly a sunken chest, elongated arms, larger thighs and this was totally opposed to the idealized iconography of traditional Egyptian artists that showed these big and strong looking Pharaohs.

Why would he make changes in the royal iconography to show him as this “weak” Pharaoh? His wife Nefertiti was also depicted having an elongated skull, did they have some kind of genetic anomaly that caused their heads– and body’s in general to be misshaped and disproportional?
Or is there something more to this strange Pharaoh and his origins? Is it possible that he was actually a hybrid human being? with genes and DNA from Extraterrestrials? What is for sure is that he was not like other Pharaohs and human beings in general, when you look at his statues and depictions you immediately point out these strange, unlike humanoid characteristics. He is simply put a strange “human”.

This female head has an elongated skull, and is probably a child of Amenhotep IV/Akhenaten (1351-1334 BCE). The eye is hollow for inlaying. The piece is broken across the neck, and is a forgery executed in the 18th Dynasty, Amarna Period style. Courtesy and Credit of wikipedia.org
Dr. Braverman (Professor of dermatology at Yale University School of Medicine) attributes the king’s female form to familial gynecomastia, brought on by an inherited syndrome called aromatase excess syndrome. This diagnosis is the first to be associated with Akhenaten. As for the shape of Akhenaten’s head, Dr. Braverman attributes this to a condition called craniosynostosis, in which sutures, the fibrous joints of the head, fuse at an early age, and interfere with the process of skull formation. The specific condition, called a sagittal suture, is dominantly inherited. Dr. Braverman says he observed this abnormality in the king’s daughters as well as in Queen Hatshepsut, daughter of Tuthmosis I, founder of Akhenaten’s paternal line, and in King Tut, who ended this line.

After his reign the city of  Amarna was abandoned and temples to the sun were destroyed, images of Akhenaten were deliberately defaced and Ancient Egypt rapidly “recovered” and returned to its old ways, worshiping many gods.Today, many  Egyptologists believe that Akhenaten was actually forced to abdicate and flee from Egypt with his loyal followers.
In 1907, the actual body of Akhenaten was discovered in Egypt’s Valley of the Kings by British archaeologist named Edward Ayrton. After unearthing Akhenaten’s mummified remains, Edward Ayrton was able to confirm that the ancient pharaoh’s skull was misshapen and elongated. Akhenaten was succeeded by his son, Tutankhamun, who became the most renowned pharaoh of all time. When his tomb was discovered in 1922 by Howard Carter, Tutankhamun was also found to have an elongated skull. In February 2010, the results of DNA tests confirmed that he was the son of Akhenaten.

This stone block portrays Akhenaten as a sphinx, and was originally found in the city of Amarna/Akhetaten. This object is now located in the Kestner Museum of Hanover, Germany. Source: http://www.flickr.com/photos/menesje/2212492438