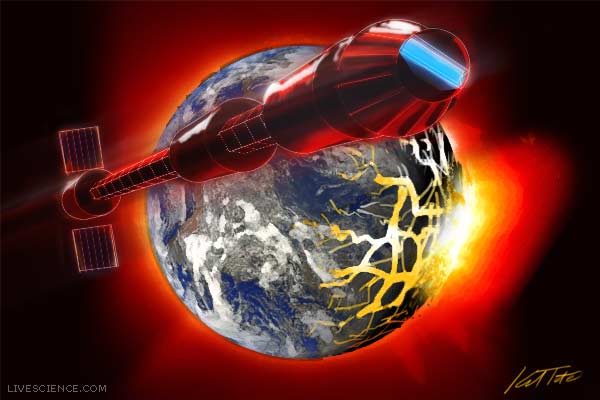 Doomsday escape scenario.
CREDIT: Karl Tate/Life's Little Mysteries
Although "doomsday" is quite unlikely from one day to the next, a humanity-exterminating event could strike at any moment. It could happen suddenly in the form of a giant, non-catalogued asteroid, or more slowly through the spread of a mutated or never-before-encountered monster virus.
Rest assured, however, that doomsday will not be a foretold supernatural event falling on a pre-selected, arbitrary date, such as tomorrow, May 21, 2011, despite the claims of a fringe Christian broadcaster in California. (Ditto for the 2012 Mayan calendar hoopla.) [Doomsday Facts (and Fictions) ]

But should doomsday come, and the planet were to become uninhabitable, what might humanity do to survive? [Apocalypse Now: The Gear You Need to Survive Doomsday]

In the short term, with the end of days nigh, the outlook is bleak. Although the concept of a last-resort, fleeing-for-the-stars planetary evacuation has been given thought, it has not received any dedicated action.
Gaining knowledge of how to preserve our civilization down the eons has been a lesser-cited rationale for further advancing human spaceflight abilities. As theoretical physicist Stephen Hawking put it to Big Think last year, "our only chance of long-term survival is not to remain inward-looking on planet Earth, but to spread out into space."

The options at hand

That said, humankind has not yet developed the means to live off-Earth for more than a few months at a time without being resupplied with food and water. The space stations we have created — the Salyuts, Skylab, Mir and the International Space Station (ISS), the only one currently aloft — are fragile things; without the altitude boosts that visiting spacecraft give these stations, their orbits decay, and the habitats eventually burn up in Earth's atmosphere (this was the fate of Skylab and Mir, with the latter planned; the ISS gets a boost several times annually).

Getting people to the ISS is costly and, therefore, rare. About 300 people (around 200 of the same individuals) have visited it over its 14-year history. The station is set up for a "permanent" crew of only six, who get swapped out after a few months on board.

As such, the ISS would not serve well as a spaceborne "fallout shelter" above the apocalyptic fray below. "The space station is nothing ... a sinking life boat," said Thomas Heppenheimer, an associate fellow of the American Institute of Aeronautics and Astronautics who has written books about space colonization and the space shuttle, among other topics.

To guarantee humanity's off-world survival, new sorts of spacecraft pushing the technological and engineering envelope would be needed, and slapping them together in a pinch — especially if society were crumbling — seems like an extremely tall order. [The Draw of Doomsday: Why People Look Forward to the End]

Nevertheless, a number of space habitats have been proposed over the years as a measured migration into the heavens, rather than escape pods. The various proposed designs, from spheres to rings to cylinders, would all rotate to create artificial gravity in parts of their interiors.

Systems of external mirrors would reflect sunlight into the vessels. Inside, a prescribed mix of gases to simulate Earth's atmosphere, as well as tracts of soil and waterways, and so on, would allow for agriculture and a sustainable human livelihood.

The moon, Mars and beyond

Of course, constructing these gargantuan ships would take gobs of time, money and skill, all of which would be lacking in the event of a planetary cataclysm.

Permanent moon, Mars and asteroid colonies have also been detailed, and while they are less far-fetched than futuristic, free-ranging space abodes, such residences remain entirely on the drawing board.

Another ambitious, yet figuratively more down-to-Earth proposal is to build an underground "doomsday ark" on the moon. The vault would house hard drives full of information on how to reboot human civilization, including instructions for metal-smelting and crop planting, for example, according to an article that appeared in The Telegraph. Genetic sequences, seeds and other biological stocks might also be stored in the ark and tended to by robots.

All that may sound great, but it's nowhere close to reality. If doomsday came tomorrow, humanity would be in a bit of pickle, to put it mildly. As a species, then, at least for the foreseeable future, "if we're ever going to die, we're going to die," Heppenheimer said.

Sursa:
After Doomsday: How Humans Get Off Earth