Balancing Rocks Around the World. 'A balancing rock is a naturally occurring geological formation...' ?!? / ~I'm Sorry!...~ 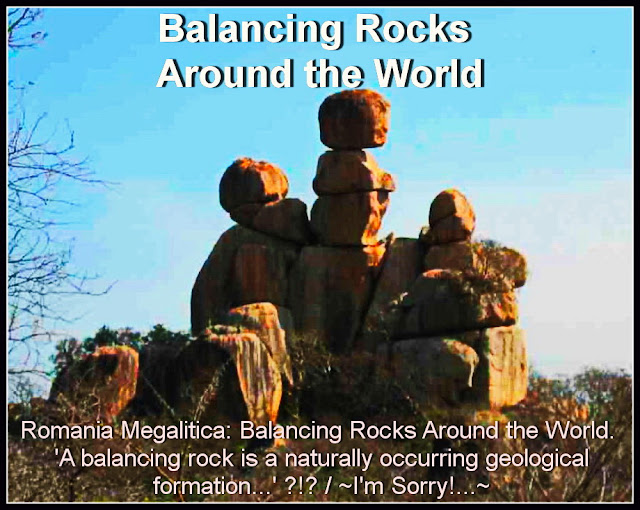 10 Famous Balancing Rocks Around the World.

A balancing rock is a naturally occurring geological formation featuring a large rock or boulder, sometimes of substantial size, resting on other rocks that often look precariously balanced. In reality, these rocks only appear to be balancing but are in fact firmly connected to a base rock by a pedestal or stem.

Here are some famous balancing rocks of the world. 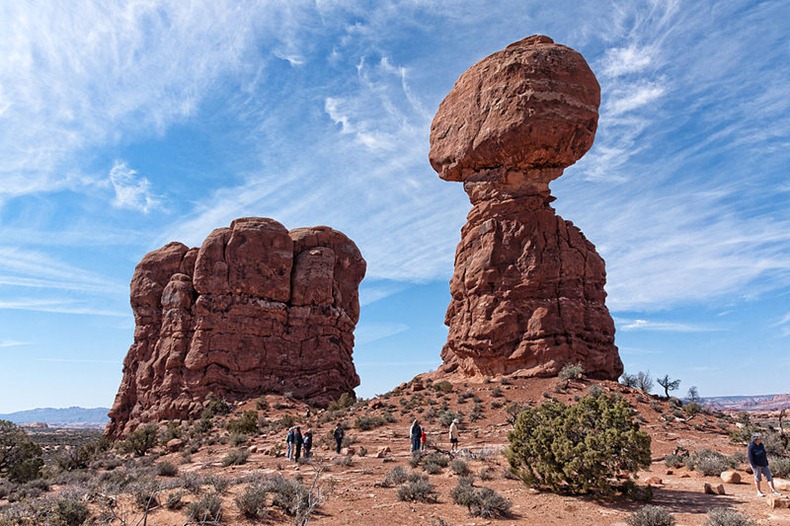 Balanced Rock is one of the most popular features of Arches National Park, situated in Utah, United States. It is located next to the park's main road, at about 9 miles from the park entrance.
The total height of Balanced Rock is about 39 m, with the balancing rock rising 16.75 m above the base. The big rock on top is the size of three school buses. Until recently, Balanced Rock had a companion - a similar, but much smaller balanced rock named "Chip Off The Old Block", which fell during the winter of 1975/1976. 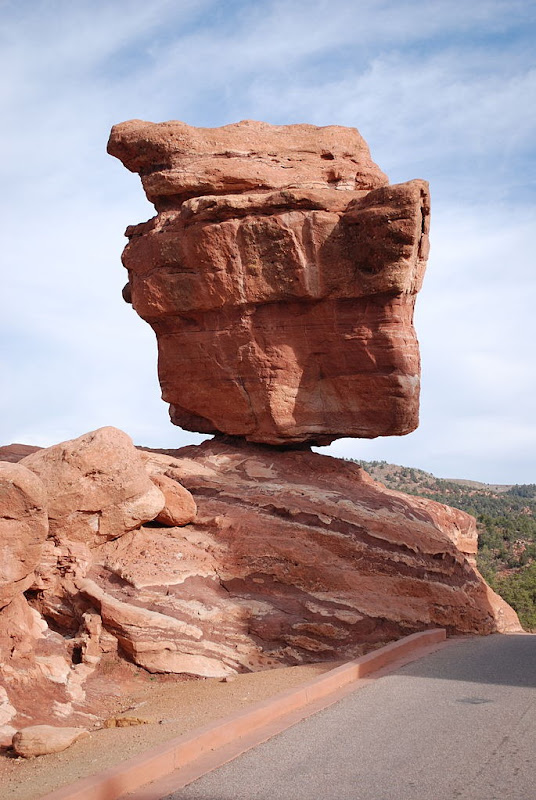 This balanced rock is located in the Garden of the Gods in Colorado Springs, Colorado. It is easily accessible by paved road and is a popular spot for tourist photography. 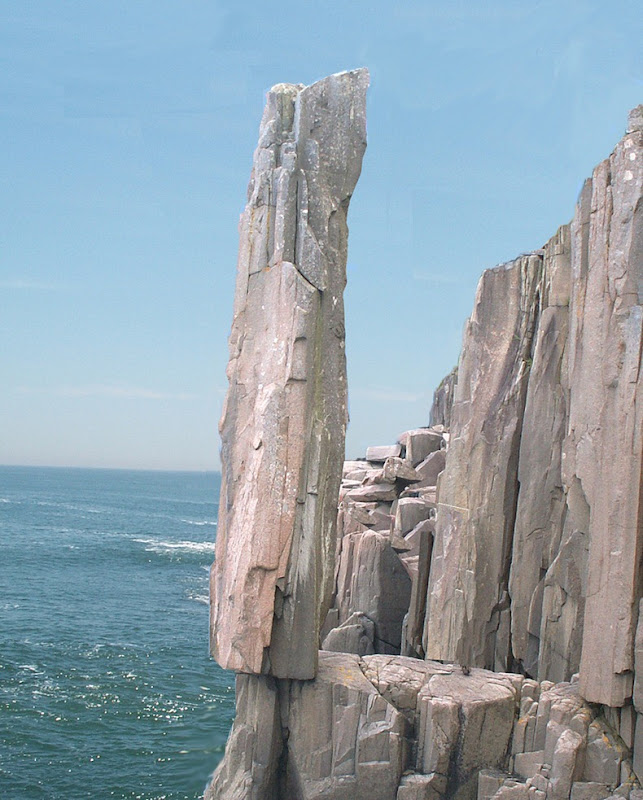 The Balancing Rock in St. Mary's Bay on Long Island, Nova Scotia seems to defy gravity as it stands on its end at the edge of the rock below. The 9 meter high column of rock is attached by two small sections with a gap between that you can look through. 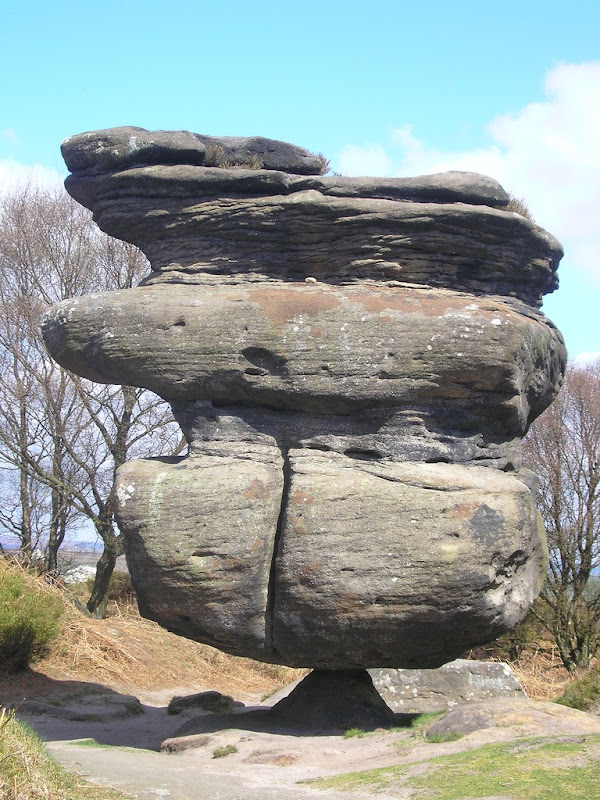 Many curious rock formations are scattered over 50 acres on Brimham Moor. One of them is the Idol Rock precariously balanced on top of a smaller rock. The rocks eroded by water, glaciation and wind, have taken amazing shapes. Many of the formations suggest all manner of things, including elephants, hippos, bears, and mushrooms. 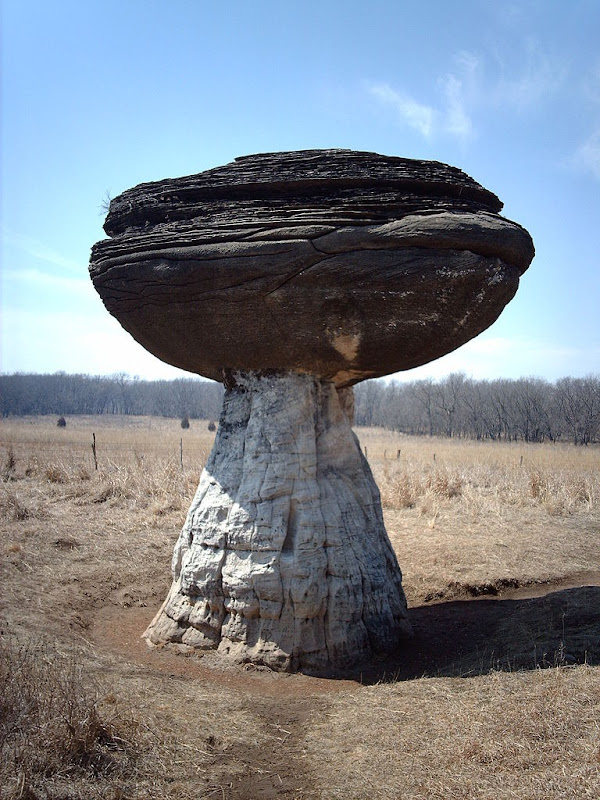 Mushroom Rock State Park, located in the Smoky Hills region of Kansas, is noted for its mushroom rock formations. These rocks were formed through a process of nonuniform erosion and weathering in which a hard mass of Dakota Sandstone resisted erosion while the underlying softer stone weathered away, forming a "mushroom" shape. There are two mushrooms and a giant shoe rock, as well as numerous other rock formations in the park. 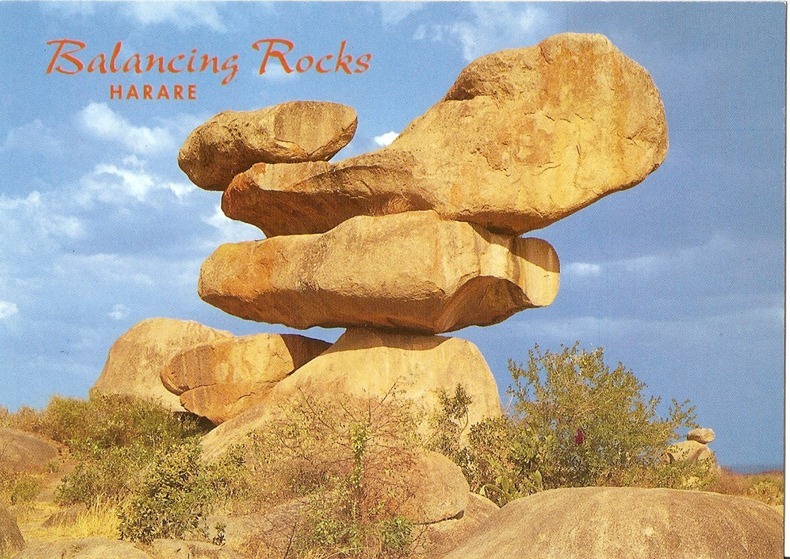 The Chiremba Balancing Rocks is located 13 km southeast of Harare in Epworth. Although strange balancing rocks are found all over Zimbabwe, this particular one became famous after being featured in Zimbabwean currency. The Balancing Rocks have been used as a metaphorical theme to explain the importance of development coupled with preserving the fragile environment of Zimbabwe as similar to that of the Balancing Rocks found in Epworth, Matopos and in other areas. 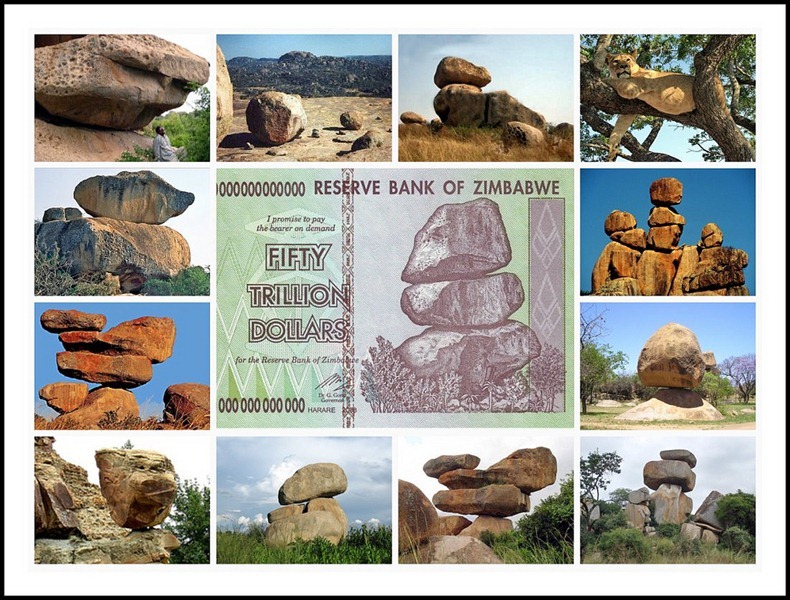 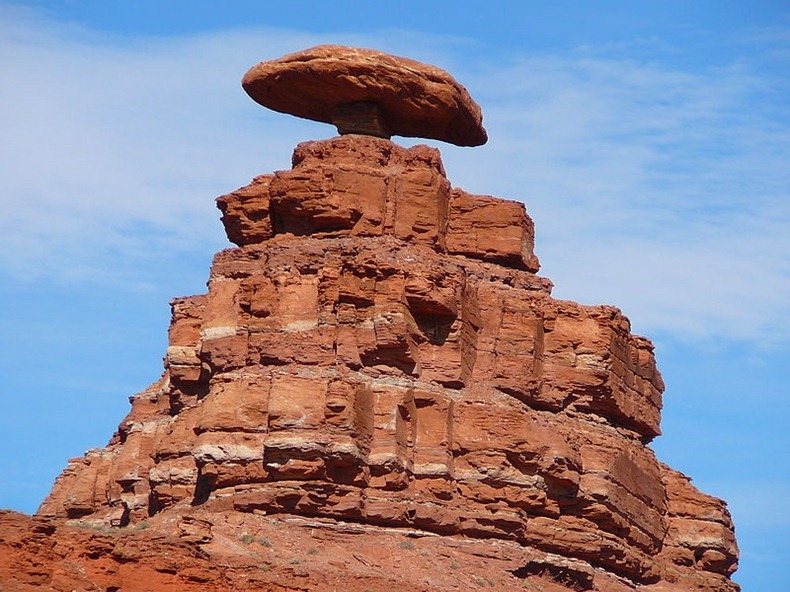 The Mexican Hat rock formation is located on Highway 163, 24 miles west of Bluff, in Utah. The name "Mexican Hat" comes from a curiously sombrero-shaped, 60-foot wide by 12-foot thick rock outcropping on the northeast edge of town. 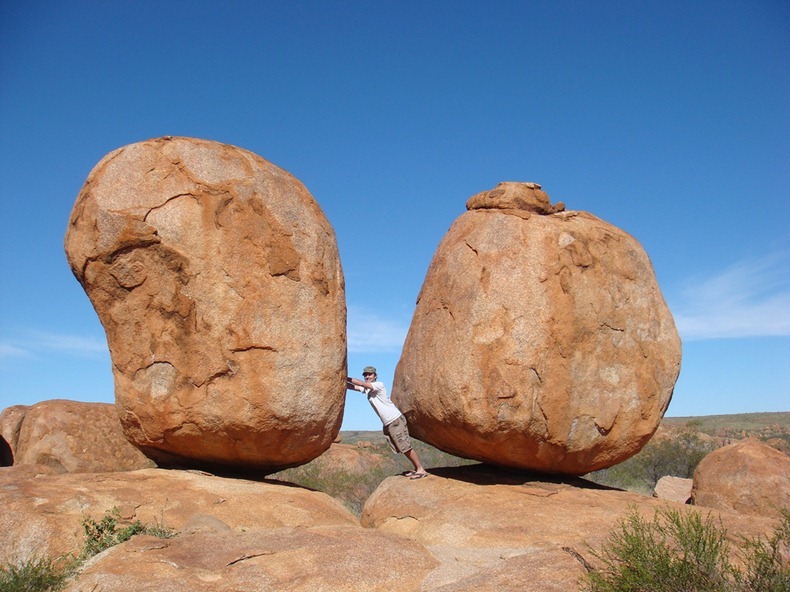 The Devils Marbles are amongst the most famous Australian rocks, located south of Tennant Creek area of Northern Territory. These huge, red, rounded granite boulders vary in size, from 50 cm up to six metres across, and they are strewn across a large area. Many of them seem impossibly balanced on top of each other. 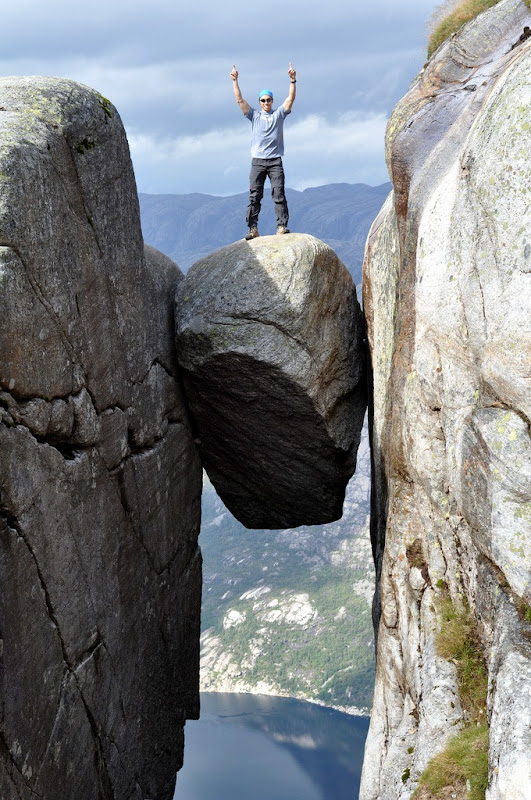 Kjeragbolten is a massive 5 cubic meter boulder wedged in to a crevasse on the edge of the Kjerag mountain in Lysefjorden, Norway. The block of stone is suspended 984 meter above the deep abyss. Despite its impressive appearance, it is easily accessible on foot without any special equipment. The whole of Kjerag mountain is a popular hiking area, and Kjeragbolten is a favorite photo spot. 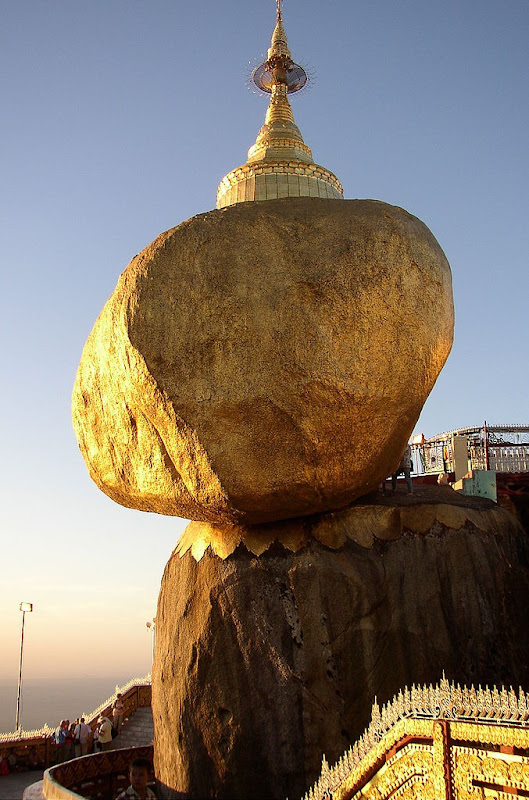 The Golden Rock (Kyaik-htiyo or Kyaiktiyo), perched atop a cliff near Yangon, is one of the most sacred sites in Burma. According to legend, the Golden Rock itself is precariously perched on a strand of the Buddha's hair. The rock seems to defy gravity, as it perpetually appears to be on the verge of rolling down the hill. At the top of the rock is built a small pagoda and covered with gold leaves pasted on by devotees. A glimpse of the "gravity defying" Golden Rock is believed to be enough of an inspiration for any person to turn to Buddhism.