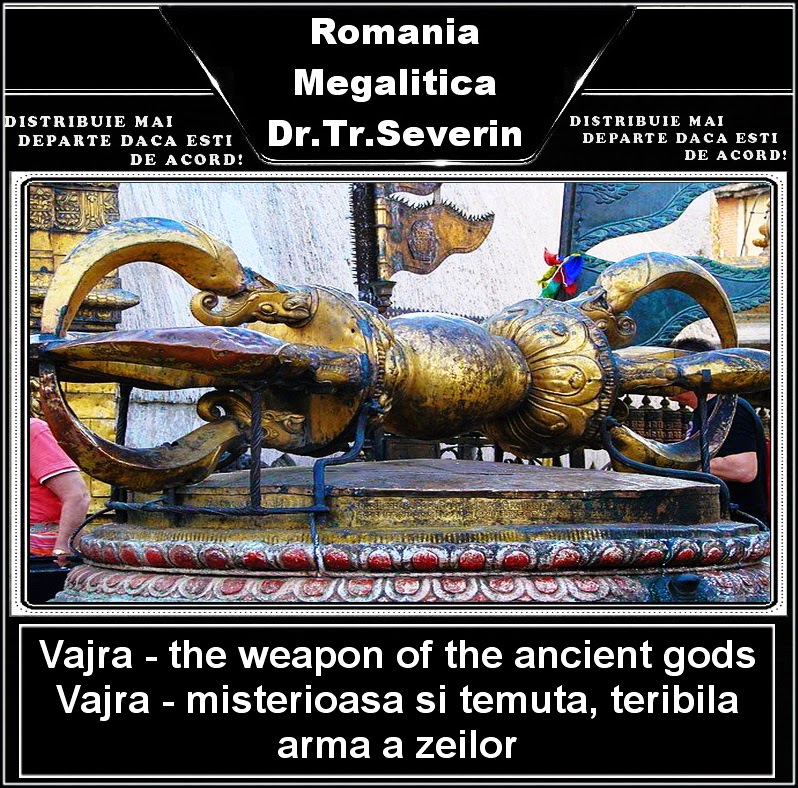 
Texts define his lyrics. this: Diamond, Thunder Axe, a bunch of lightning crossed, acting as a symbol of the deities of the true teachings of the Buddha.

In ind. Vajra mythology was known long before Buddhism as thunderous ax god Indra and other gods.

She attributed the ability to cause rain and be a symbol of fertility.
In Buddhism, the image of Vajra is that the captured lightning in the middle of the beam with curved ends (known single, double, triple, krestoobr. Variants).

In Sanskrit, the word means both "Lightning" and "diamond".
Vajra is a mace or scepter symbolizes strength and indestructibility.
It can be interpreted as one of the world axis images, recording the impact on the bottom of the upper world.

Originally vajra is an attribute of Indra, the god of thunder.
It is known as the destroyer of demons, led the gods against the asuras. Killer snake Vritra, Indra crushed his fiery club, vajra, beating, so chaos, releasing water, created life and the sun.

Vajra acts as a central symbol of one of the branches of Buddhism — Vajrayana (The name of which is connected with this subject), where it embodies the absolute and indestructible being in opposition to the illusory idea of reality.

Like a bolt of lightning, Vajra makes its way into the darkness of ignorance; like a diamond, it destroys the remaining indestructible.

Bell with a handle in the form of the vajra represents the power of faith.
Vajra has five metal rods, four of which, with curved ends in a horizontal plane, are located around the center, forming a kind of a lotus flower.

Vajra of nine rods, is less common. She is portrayed as a scepter and is an attribute of many Buddhas and Bodhisattvas.

Vajra in the hand of the statue of Buddha

Vajra is used as a symbol and as a weapon in India, Nepal, Tibet, Bhutan, Siam, Cambodia, Myanmar, China, Korea and Japan.

Vajra in the hand of the Buddha
Excerpts from the book by prof. Torchinov EA (S-Pb.)
"Introduction to Buddhism — a course of lectures" (lecture 7).

Early in the second half of I millennium BC. e. in Mahayana Buddhism gradually emerges and formed a new direction, or Jan ("Chariot"), known as Vajrayana or Tantric Buddhism, and this trend may be the final stage of the development of Buddhism in their homeland — in India.

The word vajra, part of the name "Vajrayana" was originally used to refer to the Indian thunderous scepter of Zeus — the Vedic god Indra, but gradually changed its meaning. (See note. 1.) The fact that one of the meanings of the word "Vajra" — "diamond", "adamant". Within Buddhism, the word "Vajra" began to be associated with one hand, initially perfect nature waking consciousness, this indestructible diamond, but on the other — the very awakening, enlightenment, like a thunderclap or a momentary flash of lightning. Buddhist ritual vajra, just as ancient Vajra, is a type of scepter symbolizing the awakened consciousness, and Karuna (compassion) and upayu (skillful means) in opposition prajna — upaya (prajna and emptiness symbolizes the ritual bell, Connection vajra and bell in the hands of the priest crossed ritual symbolizes awakening as the result of integration (yugannadha) wisdom and method, of emptiness and compassion. Consequently, Vajrayana word can be translated as "The Diamond Chariot", "Thunder Chariot," etc. The first translation is most common.

What can you learn about the "vajra" of modern dictionaries and encyclopedias?

"Cardiology", tate rotation in 3-d shape having a section of the "heart." Domes of the churches have a form cardiology and collected on the basis of the Vajra fasteners.

"Cardiology", a body of revolution, a 3-d shape having a section of the "heart." Domes of the churches have a form cardiology and collected on the basis of the Vajra fasteners.

Nordic gods have their own "lightning" of the original design and shape — "Hammer of Thor"
Lightning and ancient symbol of heavenly fire, known around the North European areal Indo — Thunder armor of God — Hammer. The German Donar-Thor Hammer was entitled «Mjolnir». Critics believe the origin of the word "Molnir" unknown. Designed to help them produce its etymology from the Icelandic verb milva (crush), mala (grind), the Lithuanian malti (grind) and the Welsh word mellt (lightning).

The below coins of different countries of the Mediterranean region, dating from 500 to 200 BC well visible lightning-vajra. Such coins are very, very much, it proves — in the ancient world, without exception capable people knew what it is and understand the importance of this subject.

Fleur de Lys — a stylized image of the ancient weapons of the gods
On the left a picture image of the "Lily" a little old, not the rule. From the book of heraldry Pokhlebkin: "It looks like it is a lily? Lily is so not like the lily, which gave rise to some to believe that this is a special Masonic sign, which should be seen flipping. And then we will see a bee ".
Respected William V. wrote that the image taken by European courts lilies, as a heraldic sign, is Eastern origin, "as a constant, an essential element of ornament, often played on the expensive fabric. It is these tissues, and then the expensive clothes that were coming through the Byzantine Empire from the East to Europe, introduced already in the early Middle Ages, feudal Europe, the main consumers of luxurious fabrics, with a lily. "

Is Mysterious And Powerful Vajra.


One Of The Most Dangerous Weapons Of The Gods?

An unknown, terrible and powerful ancient weapon could have contributed to the collapse of one or several advanced technologically civilizations that existed in the distant past.

Could it be that the mysterious and terrible vajra - a powerful thunderbolt throwing light - was one of such unbelievable weapons?

The artifact can be found in many places. This one is in an ancient religious complex atop a hill in the Kathmandu Valley, Nepal

This concept was proposed by Frederick Soddy (2 September 1877 – 22 September 1956), an English scientist who in fact, predicted the existence of a radioactive isotope but Soddy also suggested that there was once an ancient but extremely advanced civilization capable of harnessing of energy of nuclear reactions.

However, due to the misuse of this source of energy, this ancient civilization was almost completely destroyed.

Many of us believe that Mahabharata and the Ramayana are not science fiction works, but the reality ..... Not only did sophisticated aircraft exist such as Vimanas and Vailixi but also existed and were in use terrible nuclear weapons.

Did anything of this highly sophisticated ancient heritage survive until today?

Vajra is a Sanskrit word which defies translation because of its numerous meanings, but essentially vajra is an indestructible substance, usually represented by diamond.

Indra - most important god in Vedic religion - is frequently portrayed wielding a powerful thunderbolt - vajra, which in later Buddhism becomes a diamond sceptre, the Vajrayan.
Was Indra's vajra one of his weapons used against enemies like the demon Vritra described as both snake and dragon?

According to early Vedic texts, this demon, also known as the Enemy, had transformed himself into a fearsome "snake" with no less than 99 coils. Unfortunately for local farmers these tremendous coils were blocking up the rivers and streams and causing a great drought.

So horrifying was Vritra that none of the gods dared intervene and it was only Indra who found the courage, to fight the beast with one of his thunderbolts. As we know also Zeus was the bearer of the thunderbolt, wielding his weapon against the powers of darkness.

Zeus, the bearer of the thunderbolt, wielding his weapon against the powers of darkness.

The substance of vajra fully controls devious influences, including heavenly demons and outside ways. The light, which is the characteristic mark of vajra, has the power to break up all darkness, yet protects itself from all destruction.

According to ancient traditions, Vajra itself is a thunder of a thousand blades forged from iron, or gold mixed with bronze or stone.

This powerful device could not only destroy the enemy in form of attacking flying machine, but it also had the ability to cause rain and was a symbol of fertility.